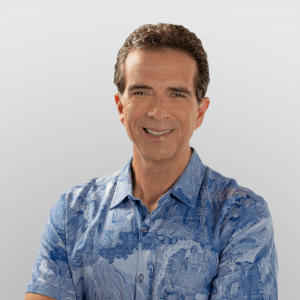 Barron is President and CEO of simplicityHR by ALTRES, Hawaii’s leader in human resources outsourcing. Barron and ALTRES are credited with not only establishing the HR outsourcing industry in Hawaii, but also pioneering it nationally.

Thirteen years ago, Barron saw the future of cloud computing and the effect it would have not only on business, but on the everyday lives of people. He mapped out a vision for a connected HRIS (Human Resources Information System) that would change the way he interfaced with his now 2000 customers and improve the lives of their employees.

Through this journey ALTRES has transformed from an administrative service provider to a technology powerhouse. The award-winning company was named “Innovative Company of the Year” in 2009 by Pacific Business News, Finalist for Pacific Business News Titans of Technology in December 2018, and in 2019 was named “Top 10 HR Cloud Solution Companies” by HR Tech Outlook Magazine.

An innovator at heart, when Barron is not “Making Business Simple” for his customers, he can be found putting his imagination to work in design and technology projects. He holds three U.S. patents and is a lifetime member of the Academy of Model Aeronautics.

A committed philanthropist, Guss sits on multiple local and national boards which address issues that range from education and public health, to community and economic development. In 2019, he launched the ALTRES Foundation to bring a new approach to philanthropic giving through leadership development and the use of technology.