Hawaiians believe that when it rains on an event day that is the aina (that which feeds us) acknowledging your presence, and the land made attendees of the East West Conference 2018 Summit feel recognized.

Venture capitalists, entrepreneurs, techies and local business people were blessed by precipitation as well as insightful roundtable discussions and power networking at the first day of the two-day conference.

A bus picked up attendees from Ala Moana Center in the morning. After a 45-minute ride of introductions, event logistics, Leonard’s malasadas and coffee, 150-plus VIP attendees arrived to Kualoa Ranch in the morning. From there, they split up in groups and participated in various activities like an ATV tour, horseback riding, ocean voyage and a “Secret Island Beach.” Non-disclosure agreements were not necessary at that point. 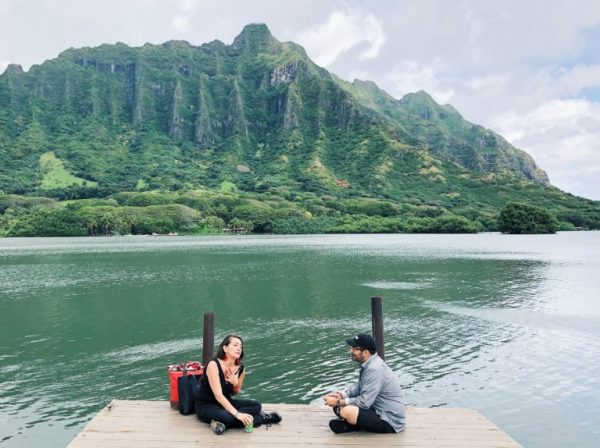 The physical activities and the embrace of the aina was a refreshing way to kickoff the conference whose main focus is to bring together the  big players in the international tech community and local entrepreneurs says Blue Planet CEO Maya Rogers.

“The goal of East Meets West is to bring investors and entrepreneurs from around the world, and specifically East and West, to meet in the middle in Hawaii and have some great conversation, networking and really connect people in the middle of the Pacific,” says Rogers.

In its fourth year, the East Meets West Conference is one of the initiatives of Blue Startups to cultivate economic sustainability and position Hawaii in the global tech industry. 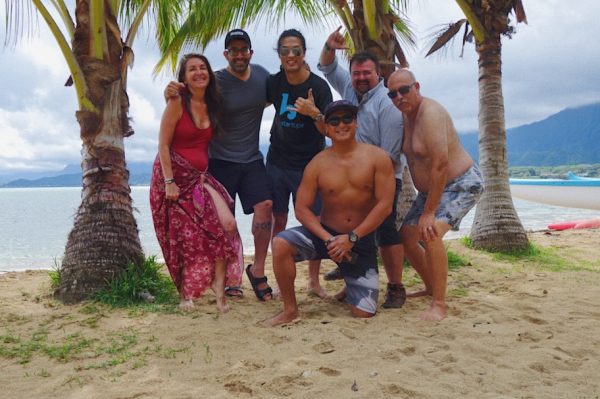 “At Blue Startups we talk about the five verticals we go after and the competitive advantages that we have. If you think about  what industries make sense: travel is one, lifestyle is one and also anything that is related to I.P. (Intellectual Property) anything that doesn’t need to physically infra-structured here,” explains Rogers. “There is no reason why we (Hawaii) can’t be the leaders of intellectual property for example.”

There were a lot of brilliant minds sharing tech industry ideas, trends and predictions throughout the entire summit. After a locally-sourced lunch from Chef Mark Noguchi and Pili Group, attendees broke out in to the roundtable discussions. There were nine of these discussions and topics ranged from “How Smart Is Your City” to “Global Ecosystems: Where Will The Next Big Text Revolution Come From.”

While there was a lot of poignant discussions and high-level conversation, Rogers was impressed by the perspective of Heroku North America Senior Business Development Manager Blaine Kahoonei. The kanaka maoli splits time between California and Hawaii, and intimately knows how Hawaii’s and the tech communities function.

“I thought what Blaine (Kahoonei) had to say was very interesting because he’s got his experience from Hawaii and the mainland so I thought he had a really good, balanced view of things,” she said.

Kahoonei is a panelist on the second day of the East Meets West Conference and he sees a lot of value in attending events like this for local entrepreneurs.

“The biggest goal for me was to share some of my manao and experiences in the tech industry in California with local entrepreneurs here in the Islands,” says Kahoonei. “I certainly would encourage more local entrepreneurs to come and interact with the amazingly talented individuals that have taken the time to come from the mainland here to share their ideas, share their thoughts, discuss emerging industries here in the Islands and there is a lot of information that can be taken from that.”