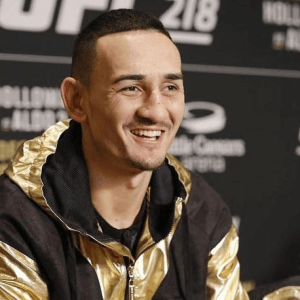 Max Holloway is a proud father and mixed martial artist competing in the featherweight division of the Ultimate Fighting Championship (UFC) where he is the undisputed UFC Featherweight Champion.

At only 27 years old, Max has the most finishes, wins, and the longest winning streak in UFC featherweight history.

Born and raised in Hawaii, Max trains out of Gracie Technics Honolulu, Legacy Muay Thai, and Tactical Strength and Conditioning. He is the 2018 Charles ‘Mask’ Lewis Fighter of the Year, and the 2017 Fighter of the Year for Fox Sports, UFC, and Rolling Stone magazine.